How can we prevent falls? Hospitals could find an answer in Cincy-designed ‘smart’ socks 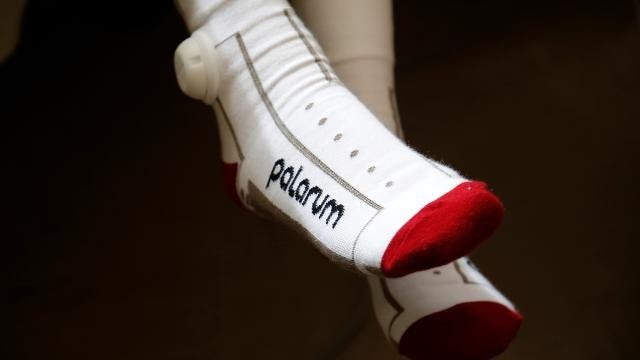 LONDON, Ohio – In a room of Madison County’s only hospital, patient Shelley Rhodes sat on the edge of her bed and dangled her feet to show off the fancy socks. “They’re comfortable. They’re warm. They don’t bind or roll,” she said. “This is going to help a lot of people.”

Then Rhodes touched her socked feet on the tile floor, and before she had a chance to shift all of her weight forward as if to stand, a nurse appeared in the room, to prevent a fall. How did the nurse know Rhodes was out of bed? The socks summoned her. 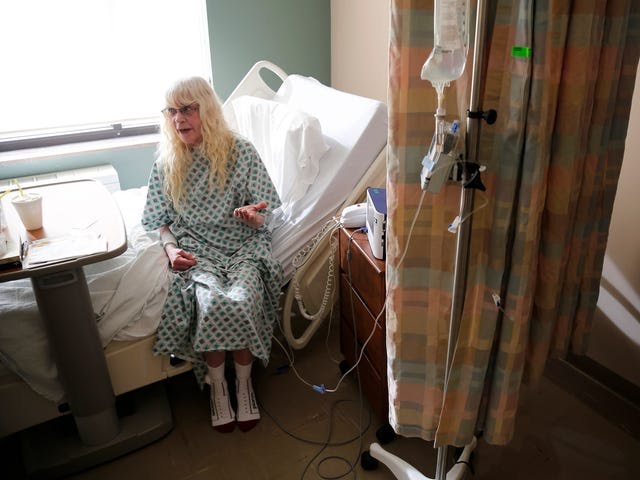 Patient Shelley Rhodes shows off her pair of Palarum Pup smart socks which signal the nearest nurse if her feet touch the ground at Madison Health in London, Ohio, on Tuesday, Oct. 31, 2017. The wirelessly connected socks are being tested in the central Ohio hospital to prevent patient falls resulting in injury.
SAM GREENE/THE ENQUIRER

Patient falls are an enduring, billion-dollar problem for hospitals and long-term care facilities. A group of Greater Cincinnati medical professionals and tech wranglers in Lebanon say they’ve got an answer that could save a lot of that pain and money. The concept so resonated with local investors that the company, Palarum, raised $3.4 million in start-up money. In eight weeks. By word of mouth.

Approval from the U.S. Food and Drug Administration came in September. Madison Health, the hospital in London, welcomed Palarum this year to run tests and collect consumer reviews. Palarum officials said a large academic health center now is trying on the socks.

Patrick Baker is chief executive officer of Palarum. While chief nursing officer at West Chester Hospital, he urged nurses to dream up answers to longstanding care issues. During a meeting one day in 2014, « I cited the example of patient falls in hospitals, and I said nothing worked, » Baker said. « I posed the question: ‘What if we had a patient sock that was a smart sock and it notified us when the patient is up out of bed?’ I left the meeting, and I thought to myself: A smart sock for patients is a brilliant idea.”

Falls are the leading cause of fatal and non-fatal injuries for adults 65 and older. Between 700,000 and 1 million people fall in medical environments every year, and Medicare pays more than $30 billion annually just for injuries from falls such as broken bones and concussions. Falls are one metric that Medicare now uses to measure hospitals on patient safety, or face a reduction in cost reimbursements.

The best way to reduce the number of falls is to prevent them. A whole marketplace of bed and chair alarms and other devices has developed to address the need, yet the numbers creep up. On a busy patient floor, nurses lose valuable seconds just figuring out which patient’s bed alarm is sounding. Baker said the Palarum sock takes back that critical time. 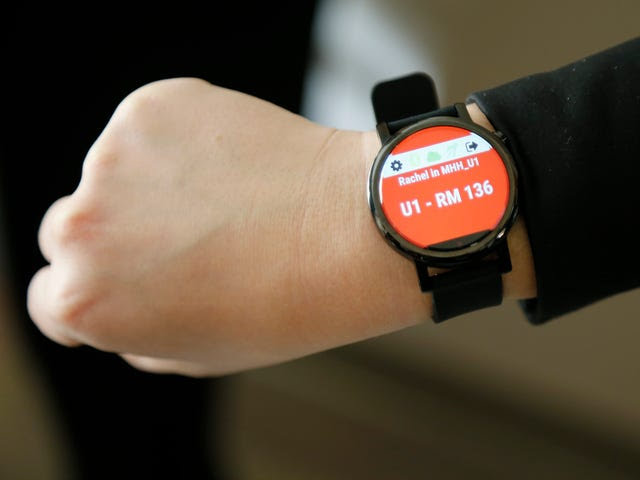 A nurse shows her connected smartwatch which monitors the Palarum Pup « smart socks » system, giving notifications of patients leaving their bed which can result in falls, at Madison Health in London, Ohio, on Tuesday, Oct. 31, 2017.
SAM GREENE/THE ENQUIRER

How the sock works

Called Pup – short for « patient is up » – the Palarum socks, made by the renowned French textile company Perrin, are made of a fine-gauge silky knit with the snug fit of high-end running socks. They have slip-resistant skids on the bottom like the usual fleecy hospital sock. But what makes the Pup socks “smart” are three woven-in sensors on the foot. They can send a signal through microfilaments in the fabric to a monitor attached to the leg shaft of one sock.

The monitor is a circuit board in a plastic case about 1¼ inches in diameter. It’s detachable so the sock can be laundered and the monitor reused for another patient. Using a Palarum tablet computer in a patient room or at the main desk, a nurse tells the monitor about the patient, including weight. The monitor can detect the difference between a horizontal patient patting the footboard of the bed or a vertical patient aiming to stand. When the socks detect downward pressure past a certain threshold, the filaments in the fabric signal the monitor on the sock. The wireless alarm goes out to the three nurses closest to the patient. When one nurse responds, the others automatically get an all-clear.

Palarum also has developed a smartwatch-style device to track the alarms, or the wireless signal can be programmed into a hospital’s existing communication system.

Chris Baker, Patrick’s brother and Palarum’s vice president of sales and marketing, said the product now is on the market, and the company has heard from several interested hospitals. The system’s cost, Chris Baker said, is “very fluid, based on the features the hospital selects,” but he estimated between $350,000 and $450,000 a year to cover 100 beds. « While our main objective is increasing patient safety, we honestly believe the hospital will save more money by reducing patient falls than what they will pay for the system.”

Baker left his job at West Chester Hospital to start Palarum and reached out to connections he made in Cincinnati – and in London, Ohio. One of Palarum’s first investors is West Chester developer Dick Alderson, who acknowledges that in a few of his own hospital stays, « I got out of bed when I shouldn’t have.” The Pup sock « was something I could get behind. So I called a few friends. It really wasn’t difficult to find investors.” Palarum raised $3.4 million in development money at the end of 2016 within two months, including $50,000 each from 50 investors.

Palarum is just one indication that Greater Cincinnati is nurturing an exploding medical-innovation market, said Mike Venerable, chief executive officer of CincyTech in Over-the-Rhine, since 2007 a major regional seed-stage investor for more than 70 digital and life-science companies in southwestern Ohio.

Palarum did not come out of CincyTech, but the seed-stage investor is nurturing more entrepreneurs with medical ideas, Venerable said. A decade ago, a third of the portfolio was in the medical realm. Today, it’s half. “There’s more of an imperative now because the consumer’s world has changed, and they have more expectations,” he said. “The dam has broken on innovation, which is good for everybody.”

Getting them on patients’ feet 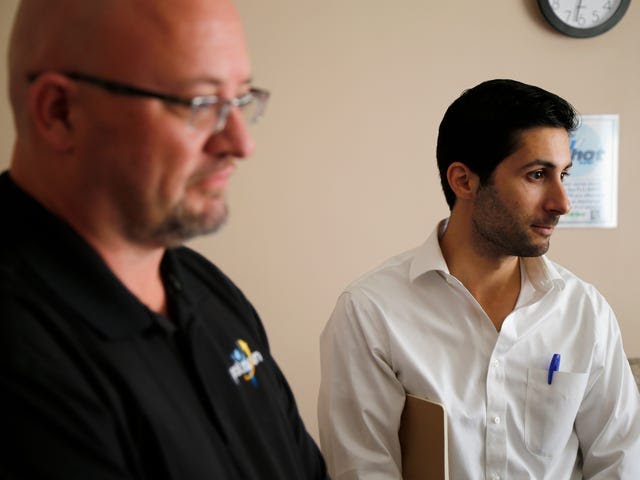 Palarum director of operations Marc Roderick (right) and director of training Mike Gilkison talk with a patient at Madison Health in London, Ohio, on Tuesday, Oct. 31, 2017. The wirelessly connected socks made by Lebanon-based Palarum are being tested in the central Ohio hospital to prevent patient falls resulting in injury.
SAM GREENE/THE ENQUIRER

With investor money in the bank, Palarum readied the Pup sock for real-life testing. Again, Baker had resources. Early in his nursing career, he worked at Madison County Hospital in the small city of London, 88 miles northeast of Cincinnati. Now a part of the OhioHealth system, the facility changed its name in 2014 to Madison Health. Baker made a pitch, and, “We said yes right away,” said chief executive officer Dana Engle, a runner who tried out a pair of Pup socks without the monitor. « You have no idea that it’s a sock with special sauce. We became believers.”

Jennifer Piccione, vice president of nursing and clinical services, said her staff does a good job at preventing falls now but can always get better. The Palarum testing at Madison Health did not collect data on whether the sock prevented falls but gave the company experience to upgrade the software and patient feedback. Piccione said nurses liked the edge that the sock’s warning gave them, enough that Madison Health will get all 46 rooms wired to use the Pup sock by the new year.

“We’d be silly to let such great technology walk out the door,” she said. “A lot of people, even around here, assume that smaller hospitals don’t have cutting-edge technology. Now we can say, ‘Look at what we can offer you to keep you safe while you’re in the hospital.’ ”

Shelley Rhodes works at a Staples store in London and landed in Madison Health on Halloween with a bad case of bronchitis. When the Palarum representative asked her to try the Pup sock, Rhodes agreed right away. She liked conducting her own experiments with the socks to see how quickly a nurse would response. Pretty fast, she said.

“This made staying in the hospital OK,” she said. “I got to contribute to science.”